Hi, my name is Gertrude, and Iâ€™m a unicorn. Not a unicorn in the sense that I couldnâ€™t possibly exist or that Iâ€™m, for some far-fetched reason, untouchable. Iâ€™m literally a unicorn. I have an 8-inch-long horn sticking right out of the middle of my forehead. Itâ€™s actually quite annoying as I have to seriously concentrate so I donâ€™t look cross-eyed all the time -- but I guess thatâ€™s what comes with the territory, when youâ€™re a unicorn.

In any event, Iâ€™ve wanted to tell the story of my Alex Rodriguez Shark Tank experience for quite some time but havenâ€™t had the guts to do so, Iâ€™m still quite traumatized from the whole thing â€“ so here goes nothing...or is it â€œhere goes somethingâ€? I donâ€™t know. Iâ€™ve never really understood that saying. I digress.

I was born in a far off land where things of fantasy are brought to life, more commonly known as a toy factory. Now, this may sound like a magical start but letâ€™s be clear, there was an awful lot of stuffing and stitching involved, which is not the most comfortable way to be born â€“ Iâ€™d imagine passing through the birth canal to be a lot more pleasant than being stabbed thousands of timesÂ by the reinforced needle of an industrial sewing machine, but apparently that wasnâ€™t an option for me. Anyway, I was moved shortly thereafter through a series of distribution centers, which were owned by a company whose name rhymes with â€œshmamazonâ€, before being acquired by the BottleKeeper team for a very important purpose. Now, let me say thatÂ being acquired by someone to be taken home and become part of a family is a big frigginâ€™ deal for a unicorn like me, itâ€™s pretty much what we unicorn-folk live for. What I found shortly thereafter made me even more excited about my impending move â€“ I was going to be on a hit TV show called â€œShark Tankâ€ and was set to go home with a famous (and super rich) baseball player named Alex Rodriguez. I mean, jackpot! When I heard the news I saw the rest of my life flash before my eyes...flying around on a private jet, eating caviar off of those cute little mother of pearl spoons, champagne for breakfast, the works. All I had to do was keep my composure on the set and not totally freak out, I just had to keep it together. And all Alex had to do was knock over some loaded BottleKeepers with a ball â€“ piece of cake.

That's whenÂ things went South, in a hurry. Apparently, I didnâ€™t do my part well enough because although I thought I held my excitement at bay after he knocked down the BottleKeepers, and he accepted me as his own, I was then left behind on the Shark Tank set, all alone, totally afraid. What did I do wrong? Was he worried that Iâ€™d bite his kids or something? I mean, unicorns donâ€™t even have real teeth, we have skittles for teeth. Itâ€™s actually how we eat, just pop out a skittle tooth for a quick snack and another one grows back in itâ€™s place. And only because I know you're thinking it but too afraid to ask, we poop skittles too. We unicorns are pretty much full fledged skittle factories. Where did you think they came from?!

Regardless, it was made very clear that A-Rod didnâ€™t want me and I was cast aside. After hours of pacing around a dimly lit back room of the studio I was moved outside and left by a dumpster. It was aÂ sadÂ sad time in my short life. 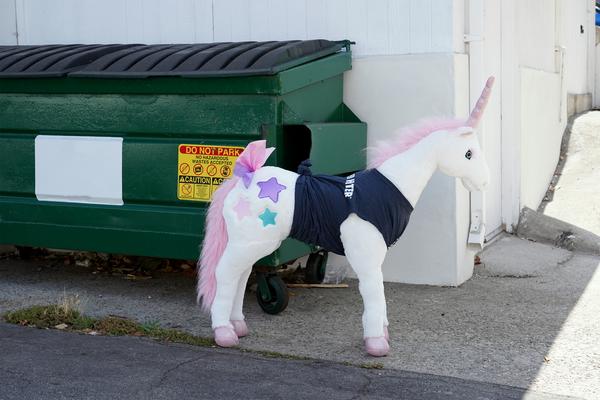 I then proceeded to wander the streets of Los Angeles. I slept in some pretty awful places, on some pretty smelly couches.

But, lucky for me, I was rescued by the BottleKeeper team and taken back to their office to recover. It's been almost a year now and, despite it being quite pleasant around here, Iâ€™ve just been a bit down ever since that day. Not depressed, just down. I even went to see a shrink and they were like, "Um, you're a stuffed unicorn, get the hell out of here". So that was super helpful.

We recently moved offices and thereâ€™s certainly more room to roam and a huge outdoor patio so I can get my tan on but, honestly, I gotta get out of here. I need to see the world. I need to live. 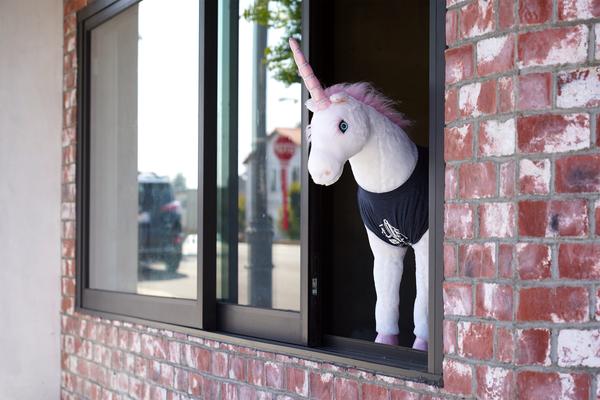