Top Craft Breweries in the US 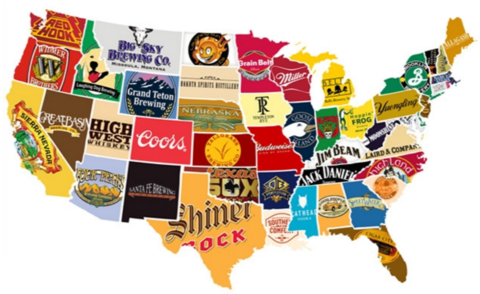 7) Pennsylvania - The German Immigrants settled in this state in the 1700â€™s and 1800â€™s which destined Pennsylvania to have great beer and great sausage. Today, the state boasts over 100 brew pubs and small breweries all contributing to its rich history brewing beer. So whether youâ€™re enjoying a pint in the city, or deep in the wilderness, which only takes 2 hours to get to from any major city, these beers are sure to be a great addition. Some stand out breweries include: Victory Brewing Co, Troegs Brewing Co, and Church Brew Works. Iâ€™m especially partial to the Hop Devil from Victory and the Nugget Nectar from Troegs.

6) Vermont - Â This state has some absolutely breathtaking scenery, a bustling live music scene in Burlington, and a â€œsupposedâ€ lake monster in Lake Champlain. It is also home to some of the tastiest craft beer in the country. So whether youâ€™re hitting the bar after the slopes, or seeing one of the nine Phish cover bands playing a show at Nectarâ€™s, you canâ€™t go wrong with any of these. The Alchemist, Switchback, Otter Creek and Long Trail are all solid Vermont Breweries. My top picks have to be the Heady Topper from the Alchemists, that is if you can find it. This beer sells out pretty much 5 minutes after it gets tapped.

5) Washington - Make sure to pack a raincoat, because you may get wet in our next state. Although the number of coffee shops may outnumber breweries 10:1, Washington has some of the best artisan beers in the country. Â Some of the top breweries include: Fremont Brewing Company, Reubenâ€™s Brew and Holy Mountain Brewing. My favorites is Fremont Brewingâ€™s seasonal summer ale. Great for those camping trips and barbecues.

4) Michigan - Next on the list is home of two great college football teams, that hate each other, but not as much as they hate Ohio State, Â and some record breaking wind chill temperatures during the winter. Donâ€™t worry if you need to stay indoors though, because Michigan has got some great breweries that are sure to warm you up, even when going outside could mean the loss of your toes. Founders Brewing Company, Bellâ€™s Brewery and Shortâ€™s Brewing Company all brew some of the best beer in the Great Lakes Region. My picks would have to go to Bellâ€™s Midwestern Pale Ale and Founderâ€™s IPA.

2) California - Boasting the most craft breweries in the country, at 431, youâ€™re sure to to be able to find something you like. Itâ€™s tough to even start a list of top breweries because there are so many unique and artfully crafted beers, but Iâ€™ll do my best to give you some solid choices the next time youâ€™re in the Golden State. Lagunitas, Stone, Anchor Steam and Green Flash Brewing Co are all fantastic choices. If IPAâ€™s are your thing I highly recommend the Lagunitas IPA and the West Coast IPA. Anchor Steam is the countryâ€™s oldest craft brewery and you canâ€™t really go wrong with any of their fine beers.

1) Oregon - To round out the list of our top states for craft beer we must travel to the land of man buns and beards. Thatâ€™s right, Oregon. This state could practically live off of its micro brew scene, and for good reason, they brew some of the most essential beers in the world. The top breweries you have to check out in between going to local farmers market and Voodoo Donuts are: Bend Brewing Company, Deschutes Brewery, Hair of the Dog Brewery and Hopworks Urban Brewery. Some must try beers from these wonderful breweries include Hop Head Imperial IPA from Bend Brewing Co and Deschutesâ€™ Obsidian Stout.

There you have it, the list of the top 7 states for craft beer. There is a plethora of great craft beer in America, take the time to sample. Undoubtedly there are some great beers that are not on this list. Make sure to keep trying new things, donâ€™t get yourself in a beer drinking rut. There are too many great breweries out there changing the way we look at beer.