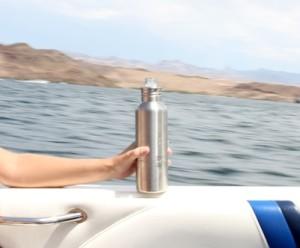 Over the past few months, my cousin Matt and I have been working diligently to put together both a fun and utility product that could make one small part of life a bit better. As a beer consumer and enthusiast, there really isn't much worse than trying to drink a warm beer. In all honesty, I'd rather pour it out than attempt to choke it down. I fully realize that this might be blasphemous to many beer enthusiasts but it's true, I'd sacrifice it to the ants.

BottleKeeperÂ was born from a pretty simple concept but it wasn't until Matt had done some extensive temperature testing (which we call "thermal conductivity" tests, making it extra scientific) that we saw the BottleKeeper didn't just keep the beer colder, it kept it a lot colder. Now we knew that we had something outside of a gag gift that you'd find at Spencer's, we had a utility product that served a rather important purpose for beer drinkers. Colder beer.

We also accidentally discovered that you could drop the BottleKeeper with a beer bottle inside and it would basically hit the ground with a thud and that was it. No broken bottles or glass projectile explosions. Not bad. Now we had 2 utility purposes for the BottleKeeper.

One of the more obvious uses for the BottleKeeper, as described in great detail by Gizmodo.com, is that the BottleKeeper also looks shockingly similar to an every day stainless steel water bottle. So although it does provide it's user the opportunity to inconspicuously enjoy a beer, which we know people will do, that really wasn't our intent.

After figuring out the manufacturing processes, we decided to launch a pre-order campaign through the crowdfunding site Fundable.com. This proved to be a really good idea as the Public Relations arm inside of Fundable was able to link BottleKeeper to a number of both small and large media outlets to do stories and reviews. It started with FirstToKnow.com, which provided a pretty significant lift from the previous 10 days of pre-orders.

But it wasn't until the Gizmodo.com article went live, which we didn't even know was going to happen, that when things went nuts. We immediately saw our web traffic increase by over 1000% and the total pre-orders increased by over 40% in just 4 days (i.e. we went from about $6,000 in pre-orders to almost $11,000 over a weekend). A rather interesting part was that many of these pre-orders were coming from the UK and Australia, meaning that BottlKeeper became an international product almost overnight. Not a terrible surprise!

The purpose of this blog is to openly and honestly share the happenings at BottleKeeper with you. We invite free-Bflowing discussion and welcome the opportunity to hear your stories, while we share ours on what will surely be an epic journey. Life is too short to drink warm beer.